Scientists from Olomouc accelerate chemical reactions with a single atom

A unique method that can accelerate diverse chemical reactions, for example, in food, chemical and pharmaceutical industries, has been developed by scientists from the Regional Centre of Advanced Technologies and Materials (RCPTM) of Palacký University in Olomouc, in cooperation with Italian colleagues from the University of Trieste. The novel accelerators of the reactions (catalysts) are single atoms of metals firmly anchored to a carbon material based on a graphene platform. These atoms can speed up numerous reactions, with uncompromised efficiency even after repeated use. The arrangement increases the catalysts’ efficiency, reducing both amounts needed and production costs. The work has been recently published in the prestigious Advanced Materials journal, one of the world’s top three materials science journals.

Catalytic reactions occur all around us, including in the human body. Solid metal catalysts are used not only in cars, where they reduce amounts of pollutants in exhaust gases, but also in the industrial production of hydrogen, ammonia, sulfuric acid, nitric acid and many other substances. Solid-state metal catalysts are very popular in industrial processes because they can be easily separated from the production mixture and reused. However, they are usually less effective than soluble (liquid-phase) catalysts, largely because smaller numbers of atoms are in contact with the reaction mixture. Thus, the Czech and Italian team of scientists has intensively sought ways to produce highly effective solid-state catalysts in which all metal atoms are accessible to chemicals involved in targeted reactions.

“We took a chemically modified form of graphene, a two-dimensional carbon material, and attached functional groups that provide convenient chemical links for robustly bonding metal atoms. In this way, we chemically anchored individual copper atoms to the surface of graphene and found they had unprecedented efficiency for catalyzing the chemical reactions used for production of important pharmaceutical substances,” said Radek Zbořil, the director of RCPTM and originator of the whole concept. 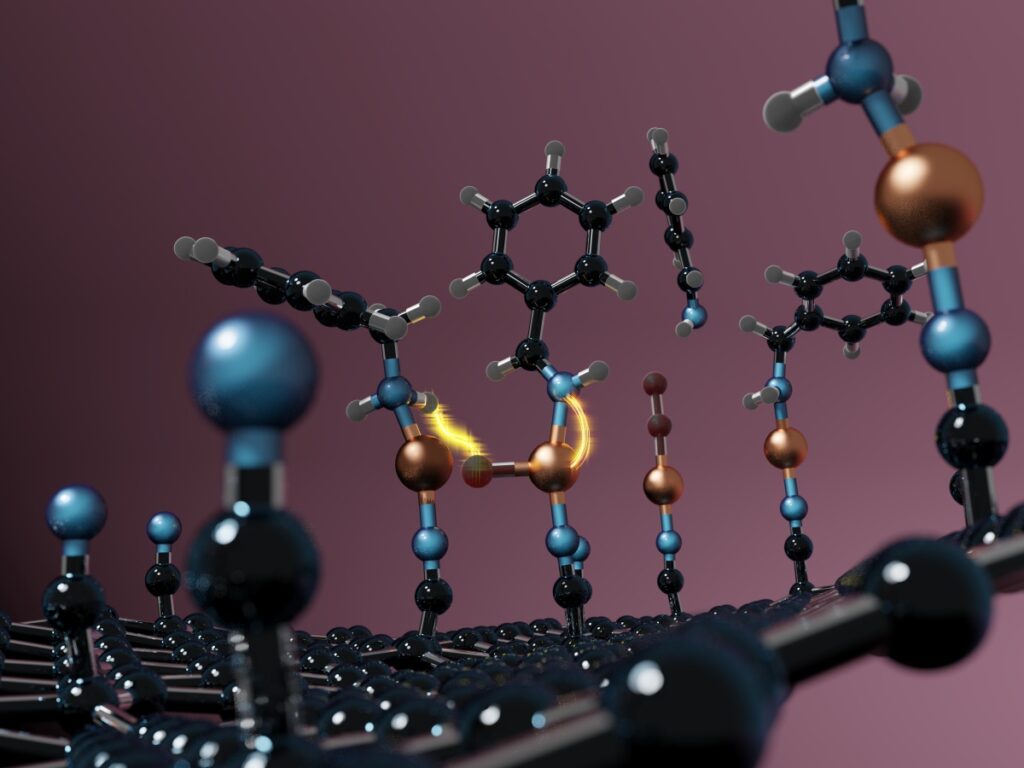 With the development of nanotechnologies and decrease in size of metal catalysts, their efficiency has increased dramatically, as nanomaterials generally have larger numbers of atoms on their surfaces and can thus more easily affect chemical reactions. “Finding a universal technology that can anchor and utilize individual atoms enables us to exploit the advantages of both soluble and insoluble (solid-state) catalysts, which was previously impossible. In this case, all the atoms are involved in the catalytic process, achieving full atomic-level economy. Thus, lower amounts of the catalyst are required. Moreover, such single metal atoms strongly bound to graphene exhibit extraordinary efficiency, which remains after recycling of the catalyst,” added Zbořil.

Strong anchoring individual atoms for catalytic purposes has been an attractive, but unfeasible “pipe dream”, until recently. “Most of the approaches previously developed do not provide sufficiently strong anchoring, eventually resulting in the catalytic atoms’ release during the reactions or recycling. The technology developed in Olomouc has unique ability to firmly anchor a wide range of individual atoms in sufficient quantities and even control their oxidation state. Thus, the new catalysts offer a wide spectrum of applications,” said Paolo Fornasiero from the University of Trieste, who has a wealth of experience in developing and applying new types of catalysts.

According to Aristides Bakandritsos from RCPTM, preparation of the catalytic material does not require demanding synthetic conditions. “Chemical bonding of atoms takes place at room temperature. The starting material for producing the graphene substrate is graphite fluoride, an industrial lubricant available in tons, so upscaling the technology should be relatively straightforward. Importantly, we can firmly anchor other single metal atoms, such as gold, platinum, iron, cobalt or nickel, to graphene. We already have promising results, for example, in electrocatalytic reactions enabling production of alternative energy sources. Here, we exploit a combination of excellent graphene conductivity and high efficiency of the anchored single metal catalysts,” he revealed.

Recent advances in graphene chemistry in RCPTM laboratories have led to the development of a number of new materials and other unique technologies, including preparation of carbon-based magnets, two-dimensional carboxylic acid, highly efficient oil sorbents and one of the smallest metallic magnets.