UP Academic Senate approves the establishment of a new university institute

The Academic Senate of Palacký University (UP AS) approved the establishment of a higher education institute. By nineteen yes votes, the senators accepted the amendment to the UP Statute, in which the new university institute has been included. This resolution, and subsequent implementation from April 2020, supports the integration of science and research capacities and processes at UP into a new university institute, bringing together three research centres of the Faculty of Science (PřF) and Faculty of Medicine and Dentistry (LF) in partnership with the Institute of Organic Chemistry and Biochemistry of the Czech Academy of Sciences (IOCB CAS) and University Hospital Olomouc.

At its last meeting for the year 2019, the UP AS largely devoted the designated time to the proposal to establish a UP higher education institute. The proposal, submitted by the UP Rector Jaroslav Miller, included two documents, an amendment to the UP Statute and a statute of the new institute called Czech Advanced Technology and Research Institute (CATRIN).

Taking turns in giving their speech, the UP Rector Jaroslav Miller, Dean of PřF Martin Kubala, Dean of LF Milan Kolář, Director of CRH Ivo Frébort, Michal Otyepka, Executive Director of RCPTM, and Marián Hajdúch, Director of IMTM, expressed their opinions. Martin Kubala, alongside the Chairperson of PřF AS Tomáš Opatrný, expressed his objections to the establishment of the university institute in the form it was presented, primarily referring to the failure to settle the terms of the faculty in the so-called technical agreement. On the other hand, LF through Milan Kolář, expressed unanimous support for the establishment of the university institute.

After a subsequent discussion, which featured a number of contributions made by the senators and guests, the UP AS endorsed the amendment of the UP Statute by nineteen yes votes. “The Academic Senate has approved the amendment to the UP Statute, which is linked to the establishment of the new institute. At the same time, the UP AS asked the rector to send the relevant amendment for registering with MŠMT only when the statute of the institute has been approved,” said Jiří Langer, Chairman of UP AS. 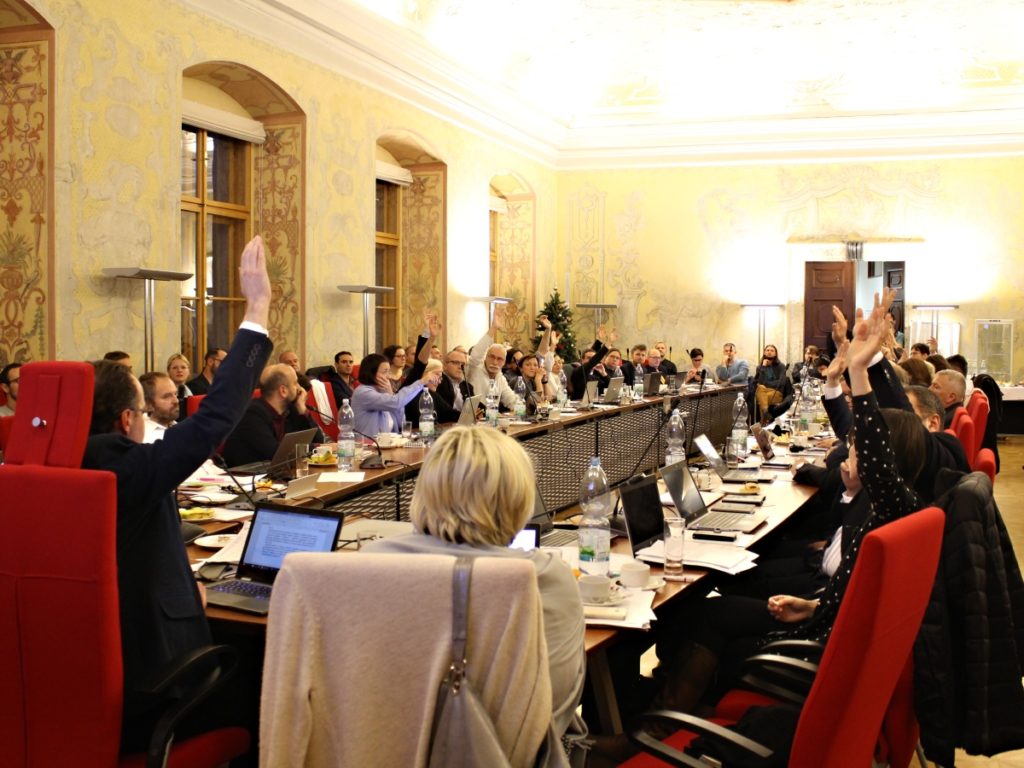 What has yet to be approved is the statute of CATRIN. “The draft of this document was returned for modification as not all requirements conditional upon approving the statute had been satisfactorily settled,” explained Jiří Langer. In this context, the senate decided to step in and set up a special committee in order to conduct negotiations to resolve the matters in the so-called technical agreement. By its resolution, the senate then called on the rector of the UP and the management of PřF to identify the points of contention relating to the establishment of the institute, prepare solutions and submit them to the Chairman of the UP AS by 10 January, 2020. “The committee will look for a satisfactory solution. The rector and PřF management should be present at the meetings of the committee as they will represent the interests of the particular side and seek compromises. In February 2020, UP AS should call on both sides to sign the modified agreement,” explained Jiri Langer.