He translates the main ideas of scientific publications into a graphic form. He does this not only for his articles, but also for his colleagues’, supposing the rules allow it. His pictures thus adorn the front pages of major scientific journals such as Nature Nanotechnology, Advanced Materials, Nanoscale and others. However, the computational chemist Martin Pykal from the Department of Physical Chemistry and the Regional Centre of Advanced Technologies and Materials (RCPTM) of the Faculty of Science finds this activity only an interesting hobby and stresses that it is always a collective work, done in collaboration with the author team. 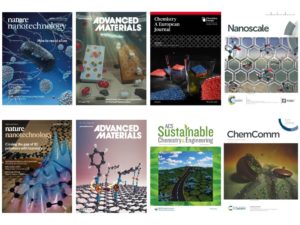 “Our goal is to make a picture attractive to look at as well as reflecting the essence of the research in the first place. Colleagues always tell me their basic ideas, which I then try to process graphically. Sometimes it’s the first draft that lives up to expectation, but, sometimes, we need to go through several rounds of comments. It is good to have the necessary background knowledge of the issue so that we can understand each other more easily,” said Martin Pykal.

For a computational chemist, who is particularly interested in developing and researching graphene derivatives, creating “cover arts” is fun. It all started about five years ago, by a sheer coincidence. His earlier works quickly became popular, and then more and more RCPTM colleagues began to turn to him.

“I originally started with vector graphics programs in 2D. Then I saw a presentation of the program in 3D, which made it possible to model the whole scene. Since then, I’ve started working that way, using only commonly available programs. When I look back at the covers I made, I can see a certain shift. But I still can’t count myself a graphic artist. I haven’t studied it; I picked it up by sitting at the computer looking at the internet,” said Pykal, smiling.

Apparently, he has managed to acquire a rather interesting competence for a scientist. Although the quality of the accompanying graphics is not a significant factor in the review process, it is one of the tools that can attract more attention and therefore more readers, either in the magazine itself or while promoting the work on the web or social networks.

“When our cover makes it to the front page of a journal, or the back, I’m always pleased. But still, I don’t consider it very significant. What is much more important, of course, is the scientific work itself, without which the illustrations could not have been made,” concluded Pykal, whose graphics have recently featured on the covers of two major journals—The Journal of Physical Chemistry Letters and Advanced Theory and Simulations.