A high-capacity, safe, and environmental friendly supercapacitor, i.e., a device for storing electrical energy, will be developed by scientists from CATRIN at Palacký University Olomouc in cooperation with colleagues from Bar-Ilan University in Israel and the Italian company ITELCOND. They will use a graphene-derived material developed in Olomouc, which is already protected by a European patent. The research to translate this discovery into practice is possible thanks to the prestigious and unique grant funded by the European Innovation Council (EIC) Transition Challenges with an allocated budget of nearly 2.5 million Euros (about 62.5 million Czech crowns).

“The nitrogen-doped graphene we have developed is proving to be very promising for use in supercapacitors. The material has a higher density than graphite, which, combined with the great ability to adsorb ions from the electrolyte, leads to very high volumetric energy density, i.e., the amount of energy stored per unit of volume of the material. This is significantly higher than for all carbon- or graphene-based supercapacitor materials described so far, which can bring a breakthrough improvement in the performance of supercapacitors,” said the team leader Michal Otyepka. This physical chemist is also the principal investigator of two prestigious grants funded by the European Research Council (ERC) addressing the development and possible application of new 2D materials. The ERC Proof of Concept project—the only one so far in the Czech Republic—was one of the conditions for succeeding in the EIC call. 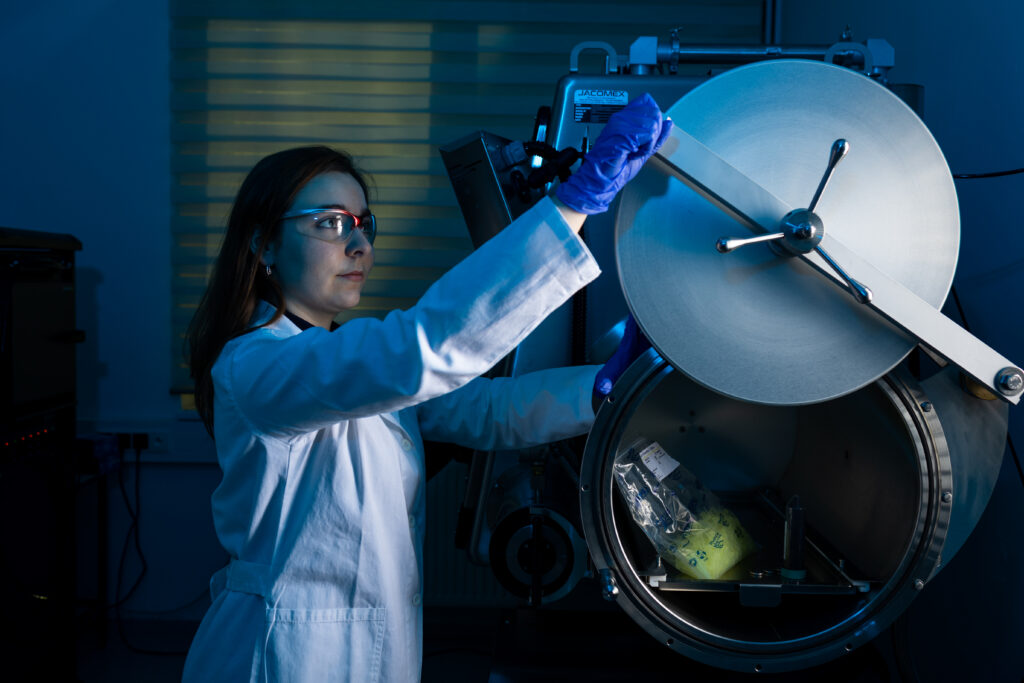 The pursuit of materials for efficient electricity storage is one of the key challenges for today’s science. The ever-increasing mobility and number of electronic devices, along with ongoing efforts to reduce fossil fuel consumption, will continue to spur global demand for affordable, reliable and sustainable energy. “The goal is not only to continuously increase battery capacity but also to look for other efficient non-lithium-based ways of storing electricity. Carbon-based supercapacitors are beginning to be an attractive alternative for energy storage, mainly due to their safety, long life and extraordinary ability to sustain millions of charging cycles without losing capacity,” added Otyepka.

The new material from CATRIN can be prepared from graphite fluoride, an industrial lubricant available on the market in tonnes, which increases its potential commercial availability. “At the same time, we were very careful to make the resulting component as environmentally friendly as possible, which we achieved by, in addition to using the carbon material itself, selecting the right electrolyte in the supercapacitor,” added another member of the research team, Veronika Šedajová, who is also a co-author of the recently granted European patent. Scientists recently reported on the benefits of the new material in the journal Energy & Environmental Science.

The next step will be to build prototypes of supercapacitors in cooperation with international partners. “We will focus on optimizing the properties of our material and move to pilot production of new types of supercapacitors. The aim is to increase the energy density of supercapacitors beyond 50 Wh/L, which will allow their wide use in electric vehicles and as battery supports in devices that need to be supplied with large amounts of energy in a very short time,” added Otyepka.

“The EIC Transition Challenges grant is a highly prestigious project. Having succeeded at the very first attempt is a significant accomplishment and the satisfaction is further enhanced by the fact that it is the only grant of its kind in the Czech Republic so far, like the ERC Proof of Concept. Two ERC grants crowned with an EIC project is a prime example of cutting-edge science, which clearly shows that Professor Michal Otyepka is an excellent scientist at an excellent international level,” added CATRIN Director Pavel Banáš. CATRIN will coordinate this type of project not only as the only institution in the Czech Republic, but also in the so-called Widening countries, which includes especially the new EU member states acceding after 2004.

71 proposals from 22 countries were submitted for research under the EIC Transition Challenges. The funding is aimed at commercialisation of new technologies that have already been experimentally validated in the laboratory.