Palacký University holds a dominant position among chemical research institutes in the Czech Republic regarding the number of highly successful publications. The university featured 42 papers in the first decile of the AIS (Article Influence Score) journal ranking according to Methodology 2017+.  AIS reflects the average impact of a paper in a particular journal over the course of the first five years of its appearance on the Web of Science. This achievement constitutes 17 per cent of the publication performance of the Czech Republic belonging to the first decile. Along with the Highly Cited Researchers list, featuring four researchers from RCPTM, this is another evidence of the high position the chemistry in Olomouc has managed to gain on a national level. 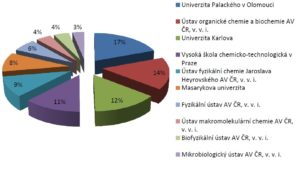 “This success is notable and makes us proud. It undoubtedly marks the outstanding quality of the research at Palacký University, primarily at the Regional Centre of Advanced Technologies and Materials, whose laboratories produce these outstanding publications. I suppose the success consists in the decision we made a couple of years ago. By this decision I mean the orientation towards new major challenges of interdisciplinary research at the interface between chemistry and material sciences, open and internationalized team, and foreign collaboration,” said Michal Otyepka, RCPTM Vice Director.

The Institute of Organic Chemistry and Biochemistry of the CAS (IOCB) occupies the second position having 35 publications in the first decile, which represents 14 per cent of the publication performance. The Charles University is the third most successful with 31 publications, constituting 12 per cent.

In the first quartile of the AIS journal ranking, Palacký University holds the second position right after the Charles University, followed by IOCB.

Bibliographical analysis is a fundamental metric for the evaluation of research institutions called Methodology 2017+, which was approved by the government of the Czech Republic. The analysis is based on the Web of Science and Scopus databases.

Graph: The share of the results of the research institutes in the first decile.